You’ve done the planning for the logistics of the campout. You’ve used SignUp to organize transportation, chaperones, and who is bringing what and how much. But, um, what will you do when you get there?? If your campers aren’t so inclined to sit still and be one with nature, here are some ideas of how to keep them busy while having fun. 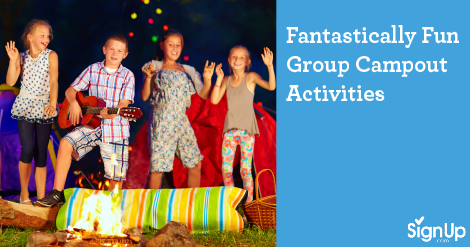 The Quintessential Camp Sing-Along. Ideally, you’ll have a musician in the group who doesn’t mind bringing a guitar or ukulele – but, even if that doesn’t happen, a good old-fashioned sing-along around the campfire is loads of fun. If you have a group of teen (or younger) campers, they will probably have strong input into what they want to sing, but younger campers can be taught the traditional songs such as “She’ll Be Coming Round the Mountain,” “Hey Ho Nobody Home”, or “This Land Is Your Land.”

Hide-and-Seek Camping Games. Kids of every age love hide and seek and these three variations are sure to provide fun for the whole gang. Play these games at night for added suspense. (Make sure you designate an area without any obvious dangers.)

Find the Parents. The object of this game is to find the hidden parents. Begin by choosing a few parents to hide within a specified area, then provide each camper with a pencil and paper (or have them use their own electronic device). Keep the campers at base camp until all the selected parents hide. After they are hidden, have the campers search for them and get signatures (or some sort of proof) from each parent as they find him/her. The first camper who finds all the parents wins.

Sardines. An “opposite” hide-and-seek game, only one person hides. The other players search for the hidden camper and hide with him or her after finding. The loser is the player left when all the others have hidden. The loser becomes the next person to hide.

Blob Tag. A type of reverse tag, the object is to be the last person left untagged. Designate one player to be “It,” and begin tagging the other players. Every time a player is tagged, they link arms with those who have already been tagged. As they do so, a blob of players forms. The last person left untagged when all the other players have been tagged (and have become part of the blob) is the winner.

Improv at the Campfire. Camp counselors gather items to use as props. Divide the group into teams of four to seven people. Give each team three props and tell them they must develop a skit using them. You may wish to choose a storyline theme for younger campers. Some suggestions are: the first day of school, swimming on a hot day, the last day of camp, a time someone was lost in the woods, a scary story, a speed run-through of a famous story, etc. Allow the teams 30 minutes to prepare their skits early in the day for performing around the campfire at night.

Make S’mores! Don’t forget to assign someone the task of bringing along the fixings for s’mores on your SignUp. (And bring a couple of alternate snacks for kids with allergies. Camping is all about inclusion and fun!)

SignUp.com is free thanks to our sponsors:

At SignUp.com, we believe that when people get together, great things happen. That’s why parents and teachers, business and community leaders, and friends and coworkers trust our coordination resources and applications to save time and achieve remarkable outcomes. Our simple, intuitive SignUp sheets and scheduling tools make it easy for people to join together and say YES to pitching in, signing up, and helping out. No waiting for approvals and passwords, no software to install—just free, easy scheduling and SignUp tools for everyday heroes. Use SignUp.com for anything including school activities, potlucks, service projects, carnivals and walk-a-thons, class parties, teacher appreciation events, swim meets, tournaments, charity races, office hours, car pool, parent-teacher conference SignUps and more. Automatic reminders help participants keep their commitments, and easy online calendar editing, reporting and messaging saves time and energy, so everyone can do more GOOD!

Bummer! An error has occurred on this page. We have sent an error report back to the geeks.

Bummer! An error has occurred on this page. Unfortunately you are using an unsupported browser. SignUp.com is not able to support technology this old.