Thanks to our partner Traveling Mom and to Jennifer Kaufman from The Delightful Life for the amazing guest article on travel tips!

Despite their adorable looks and mass appeal, there are currently only 13 giant pandas in the United States. All of them are on loan from China. Find out how this agreement began, and where you can visit these beautiful, beloved animals in the US. Then, learn a little about the giant pandas you may find on your visit, and get advice from Traveling Moms on how to have the best viewing experience possible. 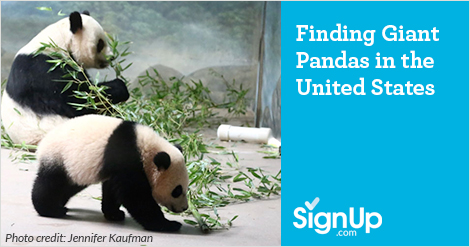 I can’t remember when my daughter’s obsession with Giant Pandas began. Now at 8-years-old, she’ll tell anyone who knows her knows that they are her favorite animal. Her twin sister and four-year-old brother like them too (because who doesn’t?!), but Avery could talk about pandas for days. And sometimes she does.

In 2014 we took a trip to Washington, D.C., after my girls studied our nation’s capital in school. It wasn’t until we were on our way to the National Zoo that I remembered Avery would get to see a giant panda in person! She was absolutely giddy, especially to see “baby” Bao Bao.

In 2015, we visited the San Diego Zoo during a Southern California vacation. San Diego has been known for its Giant Panda exhibit for decades. It was a bit anti-climactic for all of us because the pandas were pretty inactive (and somewhat difficult to see), but somehow it still felt really special to see such amazing creatures again.

Then in 2016, we took a quick trip to Atlanta to watch my beloved Braves play one last game at Turner Field. One night I realized something: In 3 years, we had unintentionally visited three of the four zoos in the United States that are home to giant pandas. A quick Google search reminded me that the final zoo we’d need to visit to complete the circuit was just 7 hours away from Cincinnati. I’m pretty sure a trip to Memphis got moved up on the calendar.

WHY ARE THESE ZOOS A BIG DEAL?

The first giant pandas to live in the United States were a gift to President and Mrs. Nixon from China in 1972. They lived in the National Zoo for more than 20 years before they died. In 1984, China began loaning giant pandas to other countries (for a price).

Today, thirteen giant pandas reside in four US zoos. All are on loan from China. These zoos work closely with other panda centers, collaborating on research, reproductive, and conservation efforts. At least 18 giant panda cubs have been born in the United States, a dozen of which returned to China by the age of four to be integrated into breeding programs. Because of collective efforts around the world, the status of the giant panda is no longer “Endangered.” In November 2016, the classification became “Vulnerable” – a huge cause for celebration! I knew that the world was working hard, but I had no idea so much progress had been made. We talked in the past about the bald eagle’s removal from the Endangered Species list, but both of my daughters felt an extra sense of pride hearing the news about pandas. After all, they spent so much time with them in the past few years.

There are four U.S. zoos that will give you your giant panda fill:

Zoo Atlanta (Atlanta, Georgia) is home to 19-year-olds Lun Lun and Yang Yang, both born in China and brought to Atlanta in 1999. Lun Lun has given birth to seven cubs, including yet unnamed twin girls born in September 2016. The babies are expected to be on exhibit at Zoo Atlanta in early 2017. Lun Lun’s previous set of twins, our sweet friends Mei Lun and Mei Huan (born July 5, 2013), returned to China earlier this month. Zoo Atlanta is open 363 days a year; find admission details here. (admission details here http://www.zooatlanta.org/home/hours_and_rates)

San Diego Zoo (San Diego, California) is perhaps the most well-known zoo in the United States. They have one of the longest-running panda programs, with six giant panda cubs born in their breeding program. Five of the pandas are thriving back in China, and are visited by the San Diego panda research team intermittently. Currently, two giant pandas are on exhibit almost every day. Bai Yun was born in China in 1991, and has been a huge asset to the zoo’s breeding program.

Xiao Liwu was born in San Diego in July 2012. The zoo’s third Giant Panda, Gao Gao, has been in San Diego since 2003. He was rescued from the wild in China in 1992, and was unable to be successfully released. He spent many years entertaining visitors to the zoo, but is now kept “backstage” due to age-related health issues. Guests can keep up with Gao Gao – and all of San Diego’s giant pandas – on the zoo’s panda blog. The San Diego Zoo is open 365 days each year; the zoo’s visitor page is helpful, but but sure to look into other Southern California options such as CityPASS or the Go San Diego card.

Smithsonian’s National Zoo (Washington, D. C.) is where the nation’s love for giant pandas began. Today, three pandas call the National Zoo home. Tian Tian and Mei Xiang, both of whom came from China in December 2000, have had 5 cubs. Bao Bao, born August 2013, is preparing for her return to China in late Winter 2017. The latest cub born at the National Zoo is Bei Bei, who celebrated his first birthday on August 22, 2016. Bei Bei underwent emergency bowel surgery in November 2016, but is expected to be back on exhibit very quickly. During his recovery, you can still see Tian Tian and Mei Xiang in their outdoor exhibits. Admission to the National Zoo is free.

TIPS FOR YOUR VISIT

Now that you’re ready to head to these zoos and check out the giant Pandas, here are a few tips on how to have the best experience possible:

Every one of these zoos lists this strategy for optimal giant panda viewing. The giant panda exhibits can draw large crowds and long lines. Interestingly, we spent nearly 45 minutes in Zoo Atlanta’s panda exhibit (on 4th of July weekend, no less!) and saw just a handful of other people pass through.

I would still suggest arriving early and heading straight for the pandas. (Come to think of it, this is sound advice for just about any travel. We’ve discovered, thanks to our early risers, that the early bird really does get the proverbial worm at most tourist destinations!)

KNOW WHERE TO GO

The National Zoo and the San Diego Zoo are among the largest in the world, and the latter can be somewhat difficult to navigate. Most of the pandas have an option to be in indoor or outdoor exhibits. Check each website or ask upon arrival to see where the giant pandas are expected to be during your visit.

It’s basically a scientific fact. Giant pandas are too cute for words. That said, they do spend an average of 12 hours per day sitting down and eating up to 80 pounds of bamboo, and 10-16 hours per day sleeping. If you do the math, that doesn’t leave very much time at all for frolicking about their habitats. On at least one visit to the giant pandas they have been… a tad underwhelming.

Don’t get me wrong. It’s always incredible to see them so close, given their scarcity, but sometimes they really just don’t move a muscle. Then again, watching Atlanta’s twins Mei Lun and Mei Huan play continuously for the better part of an hour – on tire swings, wrestling with one another, and doing somersaults – was one of the the most precious things I’ve ever seen. Unfortunately, the odds of seeing such antics are not in guests’ favor.

Find other great travelling tips and ideas on TravelingMom.com!

SignUp.com is free thanks to our sponsors:

At SignUp.com, we believe that when people get together, great things happen. That’s why parents and teachers, business and community leaders, and friends and coworkers trust our coordination resources and applications to save time and achieve remarkable outcomes. Our simple, intuitive SignUp sheets and scheduling tools make it easy for people to join together and say YES to pitching in, signing up, and helping out. No waiting for approvals and passwords, no software to install—just free, easy scheduling and SignUp tools for everyday heroes. Use SignUp.com for anything including school activities, potlucks, service projects, carnivals and walk-a-thons, class parties, teacher appreciation events, swim meets, tournaments, charity races, office hours, car pool, parent-teacher conference SignUps and more. Automatic reminders help participants keep their commitments, and easy online calendar editing, reporting and messaging saves time and energy, so everyone can do more GOOD!

Bummer! An error has occurred on this page. We have sent an error report back to the geeks.

Bummer! An error has occurred on this page. Unfortunately you are using an unsupported browser. SignUp.com is not able to support technology this old.